What time is it?! 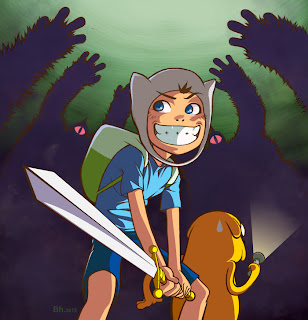 A piece based on the grand spanking new cartoon 'Adventure Time'.

I recently joined the 'Autumn Society of Philadelphia', which is an collective of artists from...uh, Philadelphia. As well as from around the nation. Fellow illustrator 'Chogrin', who runs the society, is now working with Cartoon Network on the series featured above. This being my very first post to the society blog, I decided to go along with the current theme and dedicate a piece to Adv. Time.

I originally wanted to do this as a digi painting but decided to go with a cel shading style since it's more reflective of the show.

(edit: the above piece has been updated to a better colored version!)
Posted by Ben

Email ThisBlogThis!Share to TwitterShare to FacebookShare to Pinterest
File under: Adventure Time, Paints